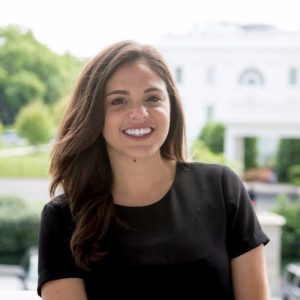 Vivian Graubard was a founding member of the United States Digital Service (USDS) at the White House, where she led efforts to improve the immigration system and criminal justice reform. She served as the strategic lead for these project — fusing her knowledge of policy, technology, and systems to help improve critical government services.

Prior to joining USDS, Vivian served as Senior Advisor to the White House Chief Technology Officer, Todd Park. She led efforts to combat campus sexual assault, prevent human trafficking, and increase diversity in technology. Vivian began her journey at the White House in 2010, in the Office of Presidential Correspondence, where she built the first-ever process for responding to Spanish language letters to the President.

Prior to joining the White House, Vivian was a fellow at the Polaris Project, an international anti-trafficking organization working to bring awareness to the issue of human trafficking via digital communication. She is passionate about the use of technology to drive change in social and humanitarian policy making.

Vivian has been honored by numerous publications, including being named to Time Magazine’s “30 people under 30 who are changing the world” list in 2013, Business Insider’s “Most Influential Women in the World” list in 2014, and Forbes 30 under 30 in Law and Policy in 2016.

Vivian graduated from American University in Washington, DC with a B.S. in Business Administration and a dual concentration in International Business and Information Systems and Technology.