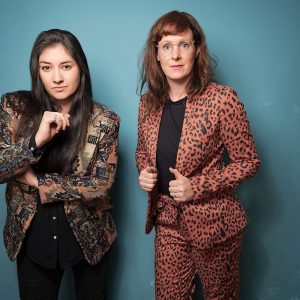 Sophie Santos is a NYC based comedian who Time Out NY recently named as one of the LGBTQ POC comedians you should know. She has written for MTV and BRIC TV and was a semi-finalist for the Sundance Episodic Lab & Fox Writers Lab. She can also be seen in the character show, Riverdale Live and as Moira in the yearlong run of Handmaid’s Tale: The Musical. She has performed at the Edinburgh Fringe Festival and The Kennedy Center. Sophie is very excited to be at her second Lesbians Who Tech Conference repping the Brooklyn-based monthly, comedy-variety show/political movement/brand in the making, THE LESBIAN AGENDA with her co-host and co-producer, Jess Salomon.
.