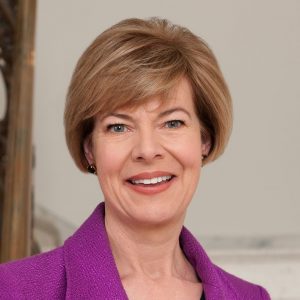 Tammy Suzanne Green Baldwin (born February 11, 1962) is the junior United States Senator from Wisconsin and a member of the Democratic Party. She served three terms in the Wisconsin Assembly, representing the 78th district, and from 1999 to 2013 represented Wisconsin’s 2nd congressional district in the United States House of Representatives.

Baldwin defeated her Republican opponent, former Wisconsin governor Tommy Thompson, in the 2012 U.S. Senate election. She is the first woman elected to represent Wisconsin in the U.S. Congress and the first openly gay U.S. Senator in history.