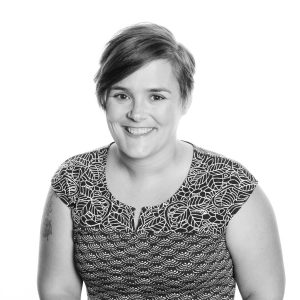 Sarah Jennings started building things as soon as she was big enough to hold a hammer, and hasn’t stopped since. Most recently, she was the Creative Director of Brand and Ad Innovation at OATH, where she obsessed over making the advertising world a better place for consumers of content. Sarah came to Oath through AOL and Millennial Media, where she built mind blowing creatives for big brands on every kind of small screen since phones had internet. She was named one of Business Insider’s 30 most creative people in mobile advertising, and loves sharing her excitement about the power of technology with anyone who will listen.
Sarah’s previous life was as a propsmaster and costumer, graduating from UVA and working at opera houses and other theaters around Europe and the United States. Sarah learned how to build pretty much any physical object during that time, but became more and more interested in what could be built on computers. She got her masters in Publication Design from the University of Baltimore and started working in ad tech. Sarah always tries to bring an element of spectacle to every project, digital or otherwise. When she’s not getting paid to play on her phone, she spends her time with the best thing she ever made – her daughter Riley.