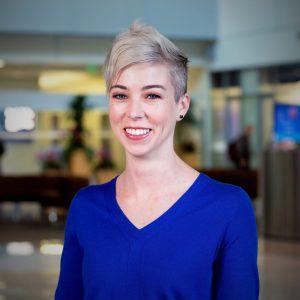 Sarah Gibson is a Senior Engineer at Qualcomm Research where she works on drones and robotics. She has worked on topics including autonomous navigation, motion planning, and reinforcement learning. Previously, she worked on a neuromorphic computing project involving the design and hardware optimization of spiking neural networks. She has filed eight patent applications, two of which have already been granted. Outside of work, Sarah is an active community advocate for STEM education. She has volunteered with FIRST Robotics and the San Diego Festival of Science and Engineering, as well as supported technical events at the Grace Hopper Celebration of Women in Computing and the Qualcomm Women’s Collegiate Conference.