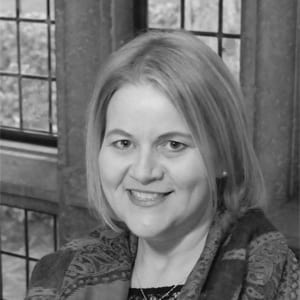 Ruthe Farmer has focused her efforts on increasing girls’ participation in technology and engineering since 2001. She provides strategic planning and direction at NCWIT, fund development, and cultivation of new partnerships, and leads the NCWIT K-12 Alliance. Ruthe is the driving force behind the hugely successful Aspirations in Computing talent development initiative, served as the 2012 Chair of Computer Science Education Week, was named a Champion of Change for Technology Inclusion by the White House in July 2013, received the Ulla Popken Phenomenal Woman Award for her work to increase girls’ participation in technology and engineering and received the Anita Borg Institute Award for Social Impact.

Ruthe has a history of scaling up innovative STEM projects. She was responsible for establishing a national Lego Robotics program at Girl Scouts of the USA, scaling out the Intel Design & Discovery engineering program to 63 locations, and forming a national partnership between FIRST Robotics and Girl Scouts of the USA. She created GirlFEST, a one-day resource expo celebrating “everything cool about being a girl.” The inaugural event drew 10,000 girls; the event has been replicated in 15 Girl Scout councils and has been adopted as the girl engagement model at the Triennial Girl Scout convention. Ruthe developed “On the Road: the Savvy Girl’s Guide to Cars”, a comprehensive program on automotive careers, safety, and maintenance sponsored by Firestone and the US Department of Labor. She received the 2007 Education Publisher’s Award for the program guidebook. She also published the Guide to Promising Practices in Informal IT Education in partnership with Girl Scouts and NCWIT in 2007, and advised on the WGBH Design Squad and All Terrain Brain resources.

Ruthe frequently speaks and presents on the topic of girls and women in technology and has been an invited speaker at the White House, the United Nations International Telecommunications Union, the European Union Energy Committee, the WebSummit in Dublin, and many more. Ruthe served on the National Girls Collaborative Project Champions Board, the FIRST Robotics Girls FIRST Advisory Board, and was a founding board member of Springboard Innovation, a non-profit dedicated to incubating grass roots social entrepreneurs. From 2001-2005, she was on the founding committee of the Oregon Robotics and Tournament Outreach Program (ORTOP), one of the largest and most successful FIRST Lego League programs in the U.S. She sits on the Lewis & Clark College Board of Alumni and is an ambassador for the University of Oxford Said Business School. Ruthe holds a Bachelor of Arts in Communications & German from Lewis & Clark College and an MBA in Social Entrepreneurship from the University of Oxford’s Said Business School and is passionate about integrating innovative entrepreneurial strategies into her work.