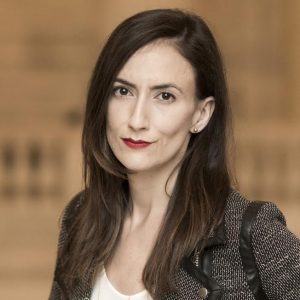 Rebecca Buckwalter-Poza (@rpbp) is a lesbian, Latinx legal analyst who provides commentary on law and politics for print, radio, and television. As Judicial Affairs Editor at Daily Kos, Rebecca covers the Supreme Court, judicial nominations, and legal developments, focusing on civil rights issues. She has worked in politics, policy, and law on five continents, including as a Henry Luce Scholar at the Asian Legal Resource Center in Hong Kong.

In 2018, Rebecca sued Donald Trump for violating her First Amendment rights and won.

Previously, Rebecca served as a Fellow at the Center for American Progress. She has also worked for the Progressive Accountability Office, a project of CAP and Media Matters where she directed the polling and analytics program; Change.org, where she served as campaign director and spokesperson; and the Office of James Carville. In 2008, Deputy National Press Secretary of the Democratic National Committee.

Rebecca co-authored James Carville’s 40 More Years as well as contributing to Paul Begala’s Third Term. She has been published by Democracy Journal, Washington Monthly, CNN, NPR, The Daily Beast, Pacific Standard, The Nation, The Atlantic, Politico, Slate, Forbes, and others, as well as contributing to national and international radio and television, including MSNBC. Her academic work on the implications of the Trump administration for access to justice in the United States has appeared in the Yale Law Journal; personal essays can be found at Catapult and The Paris Review.

Rebecca received an A.B. in Government from Harvard College and a J.D. from Yale Law School. After completing a one-year civil rights fellowship in the Office of the U.S. Attorney for the District of Connecticut, she clerked for the Honorable Margaret Ryan on the Court of Appeals for the Armed Forces and the Honorable Juan R. Torruella on the U.S. Court of Appeals for the First Circuit. Rebecca has been profiled by Cosmopolitan and recognized by Glamour and the Harry S. Truman Scholarship Foundation for her work in public service. Most recently, she was awarded Tagg Magazine’s 2018 Enterprising Woman Award for her work as founder of Women Crush Wednesday, a 700-strong (and growing) organization for LBT women and gender non-conforming, non-binary, and trans allies in the D.C., Maryland, and Virginia area.