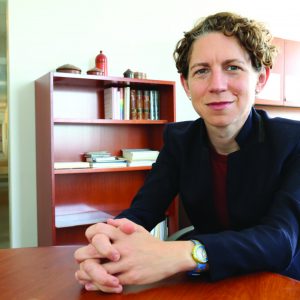 Rachel B. Tiven is the Chief Executive Officer of Lambda Legal, the country’s oldest and largest LGBT legal organization. She is a leading strategist and spokesperson in the movement to achieve full recognition of the civil rights of lesbians, gay men, bisexuals, transgender people and people living with HIV.

Tiven is a graduate of Harvard-Radcliffe College and Columbia Law School. Before becoming a lawyer, she worked at Bloomberg Business News, and then at Lambda Legal as a member of the media team in the late 1990’s. As a lawyer, she represented immigrant clients at the Legal Aid Society of New York and served as a law clerk to the Hon. Barbara S. Jones in the Southern District of New York. She is a recipient of Columbia’s Public Interest Law Foundation award, and was named one of the Advocate magazine’s 40 under 40.

Lambda Legal was founded in 1973 to protect and promote equality and to fight discrimination based on sexual orientation, gender identity or expression or HIV status through impact litigation, education and policy work.