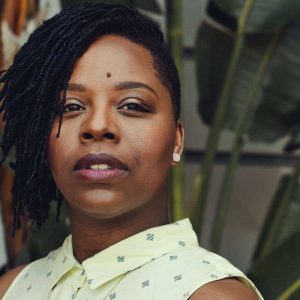 Patrisse Cullors is a artist, organizer, and freedom fighter from Los Angeles, CA. Cofounder of Black Lives Matter, she is also a performance artist, Fulbright scholar, popular public speaker, and an NAACP History Maker. She’s received many awards for activism and movement building, including being named by the Los Angeles Times as a Civil Rights Leader for the 21st Century and a Glamour 2016 Woman of the Year. Patrisse is currently touring selective cities with her multimedia performance art piece POWER: From the Mouths of the Occupied.

A self-described wife of Harriet Tubman, Patrisse Cullors has always been traveling on the path to freedom. Growing up with several of her loved ones experiencing incarceration and brutality at the hands of the state and coming out as queer at an early age, she has since worked tirelessly promoting law enforcement accountability across the world while focusing on addressing trauma and building on the resilience and health of the communities most affected.

When Patrisse was 16-years-old she came out as queer and moved out of her home in the Valley. She formed close connections with other young, queer, woman who were dealing with the challenges of poverty and being Black and Brown in the USA. At 22-years-old Patrisse was recognized for her work as a transformative organizer by receiving the Mario Savio Young Activist Award. A Fulbright Scholarship recipient, Patrisse received her degree in religion and philosophy from the University of California, Los Angeles in 2012. That same year she curated her first performance art piece that fearlessly addressed the violence of incarceration, STAINED: An Intimate Portrayal of State Violence. Touring that performance lead to the formation of the Coalition to End Sheriff Violence and eventually her non-profit Dignity and Power Now, both of whom have achieved several victories for the abolitionist movement including the formation of Los Angeles’ first civilian oversight commission over the Los Angeles County Sheriff’s Department.

In the summer of 2013 fueled by the acquittal granted to George Zimmerman after his murder of Trayvon Martin, Patrisse co-founded a global movement with a hashtag. Black Lives Matter has since grown to an international organization with dozens of chapters and thousands of determined activists fighting anti-Black racism world-wide.

In 2014 Patrisse was honored with the Contribution to Oversight Award by the National Association for Civilian Oversight of Law Enforcement (NACOLE) recognizing her work to initiate civilian oversight in Los Angeles jails. Patrisse then completed a fellowship at the Arcus Center for Social Justice Leadership where she prepared and led a think tank on state and vigilante violence for the Without Borders Conference. There she produced and directed the first in a series of theatrical pieces titled POWER: From the Mouths of the Occupied.

In 2015 Patrisse was named a NAACP History Maker, a finalist for The Advocate’s Person of the Year, a Civil Rights Leader for the 21st Century by the Los Angeles Times, and was invited to the White House. Google awarded Patrisse with their Racial Justice Grant to support her ongoing Ella Baker Center project developing a rapid response network that will mobilize communities to respond radically to law enforcement violence, the Justice Teams for Truth and Reinvestment. In conjunction with the Justice Teams Patrisse is also supporting the ACLU’s development of their Mobile Justice app. Patrisse works with many organizations worldwide.

2016 was a strong year for Patrisse. She delivered the keynote address at over a dozen colleges and universities including American University, The University of Notre Dame, the University of Pennsylvania, and Cornell. She was named a Leading Edge Fund Fellow by The Rosenberg Foundation, a Senior Fellow for Maternal Mortality by MomsRising, a Kick-Ass Woman of Color by DLG Media, and received the Defender of the Dream Award from the AFL-CIO Executive Council Committee on Civil and Human Rights, the Revolution Award for Freedom from ImageNation Cinema Foundation, the Justice Award from National Center for Lesbian Rights, the Community Change Agent Award from BLACK GIRLS ROCK! Inc., the Glamour Women of the Year Award for The Justice Seekers, and honorary doctorates from Chicago’s South Shore International College Preparatory High School and Clarkson University. With the Justice Teams mobilizing and the Black Lives Matter movement gaining even more momentum, 2017 will be another powerful step towards freedom.

Patrisse will continue to create, organize, and shut it down until all Black lives matter.