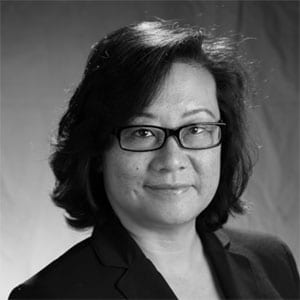 Since then, Ms. Tantoco has led emerging technology initiatives including artificial intelligence, e-commerce, virtualization, online marketing and mobile applications. Ms. Tantoco holds four US patents on intelligent workflow and is a speaker and author on mobile, security, big data, and  innovation. As Senior Product Manager at Palm, Tantoco pioneered mobile  enterprise solutions in the early 2000s which helped pave the path in mobile  technology, developing and deploying some of the world’s earliest mobile applications. As Chief Architect at Bank of America Merrill Lynch, Tantoco led the re-design and implementation of the company’s Investment Banking data warehouse, a project that mirrors many of the City’s big data and analytics initiatives.

Ms. Tantoco most recently served as UBS APAC CTO for client-facing technology and innovation, with regional responsibility for the Asia Pacific region. She currently holds four US patents in artificial intelligence and workflow systems. Tantoco lives in Greenwich Village and has one daughter.