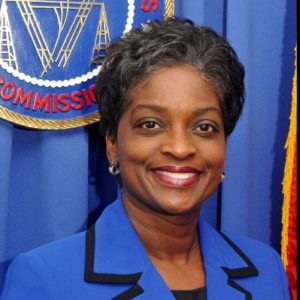 Clyburn began her service at the FCC in August, 2009, after spending 11 years as a member of the sixth district on the Public Service Commission (PSC) of South Carolina. She served as its chair from July 2002 through June 2004.

Prior to her service on the PSC, Clyburn was the publisher and general manager of The Coastal Times, a Charleston-based weekly newspaper that focused primarily on issues affecting the African American community. She co-owned and operated the family-founded newspaper for 14 years.

A longtime champion of consumers and a defender of the public interest, Commissioner Clyburn considers every Commission proceeding with an eye toward how it will affect each and every American. She is a strong advocate for enhanced accessibility in communications for disabled citizens, and works closely with representative groups for the deaf and hard of hearing. She has fought to promote strong competition across all communications platforms, believing that the more robust and competitive the marketplace, the less need there is for regulation. However, when the market is not adequately addressing consumer concerns, Clyburn is an outspoken champion for smart, targeted regulatory action. She has pushed for media ownership rules that reflect the demographics of America, affordable universal telephone and high-speed internet access, greater broadband deployment and adoption throughout the nation, and transparency in regulation. Commissioner Clyburn is a member of the Federal-State Joint Board on Universal Service, Federal-State Joint Board on Separations, and the Federal-State Joint Conference on Advanced Services, all of which she chaired for three years during her first term at the FCC.

Clyburn is a graduate of the University of South Carolina, and holds a Bachelor of Science degree in Banking, Finance and Economics.