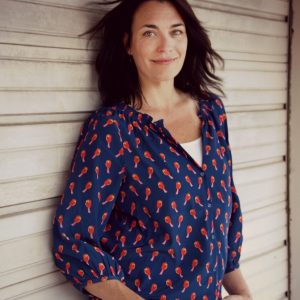 Meredith Walker is the Co-Founder and Executive Director of Amy Poehler’s Smart Girls. Walker began her television career under the mentorship of legendary journalist Linda Ellerbee at Nick News. As a producer of that show, Walker traveled to nearly every state in the U.S. interviewing kids for the Peabody and Emmy award-winning series. This experience became the foundation of Walker’s deepening interest in the lives of young people.

Walker went on to serve as the head of the Talent Department for Saturday Night Live, where she met her best friend, Amy Poehler. The pair decided to combine talents to create their shared vision of an organization encouraging and celebrating everyday girls experiencing adolescence.

Now living in Austin, Texas, Meredith is leading the charge of what that shared vision became: Amy Poehler’s Smart Girls. What started as an online “clubhouse” primarily for girls has evolved to become an inclusive, positive online community for Smart girls and boys alike – anyone who identifies with its mission of positive empowerment and advocacy of causes relating to education, creativity, leadership and more.

Walker has toured far and wide to promote the mission of Smart Girls. She has traveled as the journalism envoy for the U.S. State Department Bureau of Culture and Education’s mission to the Al Za’atari and Emirates Refugee Camps and visited remote primary-care clinics in Haiti and rural villages in Malawi. She has documented the status of women and girls around the world with global aid delegations, participated on countless panels, and earned the title of “distinguished lecturer”– much to the surprise of some of her college classmates! Throughout, she continues to mentor girls online and in Austin.

In 2015 Meredith was named a “Profile In Power” finalist by the Austin Business Journal and Austin Way designated her “The Confidence Builder.” In 2015 Tribeza Magazine called her “unapologetically, brilliantly herself” in naming her one of their 30 “Persons of the Year.” She was the September 2016 cover woman for Austin Woman magazine. In 2016, Walker was a guest of the White House, hosting both the Champions of Change for Computer Science Education summit and served as an expert panelist on the White House Summit: Breaking Down Gender Stereotypes in Media and Toys Panel, The Role of Parents, Advocates and Youth Serving Organizations. She and Amy Poehler were co-panelists at United State of Women: Revolutionizing Gender Norms.

Meredith was a 2016 WIlliam J. Clinton Distinguished Lecturer at the Clinton School for Public Service and served on a delegation to Haiti with CARE and Hope Through Healing Hands. Meredith’s appointments include the Ann Richards School for Young Women Leaders Advisory Council , Common Sense Advisory Board for Gender Equality and the ONE Girls and Women Advisory Board. In addition, she teamed up with the Austin-American Statesman for her outdoor series POCKET ADVENTURES , travels to schools presenting the Smart Girls Roadshow and has been published by POETRY and MOTTO for TIME.