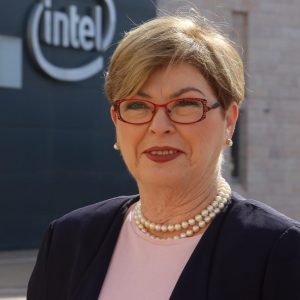 Maxine Fassberg is a vice president in Intel Capital and Executive in Residence at Intel Corporation.

Previously she was general manager of Intel Israel from 2007-2017 and the plant manager of Fab 28 where she was responsible for manufacturing operations, including planning, product output and cost effectiveness for Intel’s manufacturing facility in Qiryat Gat, Israel.

Fassberg joined Intel’s Portland Technology Development in 1983 as a lithography engineer during the Fab 8 startup and in 1991 she was awarded a patent for the original Polyimide process. Engineer manager of Fab 18 from its inception in December 1995, she next became Fab 18 factory manager from 2000 – 2004 followed by becoming plant manager responsible for Intel’s Fab 28 start-up. Under her leadership Fab 28 won Intel’s Quality Award (IQA) for 22nm ramp receiving two Intel achievement awards in connection with inter-die electric material problem resolution.
Fassberg was inducted into the Women in Technology International (WITI) Hall of Fame in June 2009 for her passionate contributions and commitment which enable and encourage other technical women to advance in their careers. She was awarded the Israel Industry Award in 2011 by the Manufacturers Association of Israel and received the prestigious Hugo Ramniceanu Prize in Economics in 2012. She has been identified as one of the 10 most powerful women in tech in April 2012 as published by CNN. In 2014 she was honored among 14 Israeli women leaders in various areas, to light the Independence Day torch in the Israel national Independence Day ceremony.
Fassberg received a master’s degree in applied chemistry from The Hebrew University of Jerusalem in 1978. She has been engaged in many activities directed towards enhancing Intel’s brand and proliferating Intel values in the community. She sat on the managerial committee of the Bank of Israel and today is on the board of directors of The Hebrew University of Jerusalem.