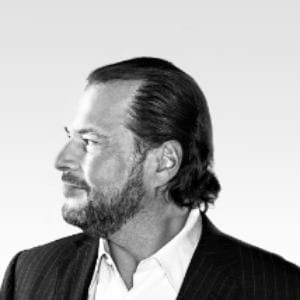 Marc Benioff is chairman and CEO of Salesforce. One of the pioneers of cloud computing, Benioff founded the company in 1999 with a vision to create an on-demand, information management service to replace traditional enterprise software technology. Under his leadership, Salesforce has grown from a groundbreaking idea into the fastest growing top ten software company in the world and the largest customer relationship management (CRM) company.

Salesforce’s mobile, social and connected cloud technologies help companies create deeper, more meaningful connections with their customers. For its revolutionary approach, Salesforce has been named the World’s Most Innovative Company four years in a row by Forbes Magazine. Fortune Magazine named Salesforce as the World’s Most Admired Company in the software industry two years in a row, and ranked the company #7 among the World’s Best Places to Work.

Benioff has been widely recognized for his visionary leadership and pioneering innovation. He was named Businessperson of the Year byFortune readers, one of the Best CEOs in the World by Barron’s, and he received The Economist’s Innovation Award. He served as co-chairman of the President’s Information Technology Advisory Committee from 2003–2005.

Throughout his career, Benioff has evangelized a new model of integrated corporate philanthropy. In 2000, he launched the Salesforce Foundation and established the “1-1-1 model,” whereby the company contributes one percent of product, one percent of equity, and one percent of employee hours back to the communities it serves globally. Today, the Foundation has inspired other leading corporations to adopt the 1-1-1 model. Benioff has focused his personal philanthropy on advancing children’s health care through UCSF Benioff Children’s Hospitals.

Benioff is a 35-year veteran of the software industry. Prior to launching Salesforce, he spent 13 years at Oracle Corporation. He founded his first company, Liberty Software, which created video games, at the age of 15. He also worked as an assembly language programmer in Apple Computer’s Macintosh Division during his college years. Benioff received a Bachelor of Science in Business Administration in 1986 and an honorary degree of Doctor of Humane Letters in 2014 from the University of Southern California.

He is the author of three books, including the national best-seller, Behind the Cloud.