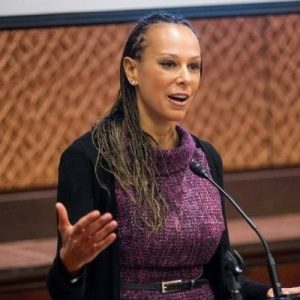 Malika Saada Saar is Google’s Senior Counsel on Civil and Human Rights. Before joining Google, Malika was founder and Executive Director of the Human Rights Project for Girls (Rights4Girls), a human rights organization focused on gender-based violence against young women and girls in the U.S. She also served as Special Counsel on Human Rights at The Raben Group. As a human rights lawyer and advocate, Malika led the effort to shut down Craigslist sex ads that served as the leading site for the trafficking of children for sex, ended the federal practice of shackling pregnant mothers behind bars in U.S. prisons, and successfully advocated for millions in federal funding for treatment services for at-risk families. Newsweek and the Daily Beast have named Malika as one of “150 Women Who Shake the World.”

The Obama White House selected Ms. Saada Saar to serve on the Presidential Advisory Council on HIV/AIDS. She also serves on the Board of Directors for the Robert F. Kennedy Center for Human Rights and Essie Justice Group.

Ms. Saada Saar holds a B.A. from Brown University, M.A. in Education from Stanford University, and a J.D. from Georgetown University Law Center. She lives in Washington, D.C. with her husband and three children.