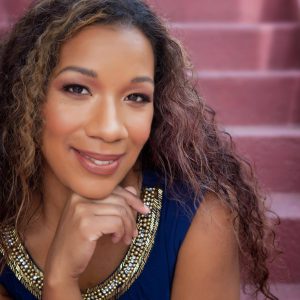 Lisa Mae Brunson is a Creative Visionary, Speaker, Author & Social Innovator that is committed to impacting humanity on a global scale. She was named Long Beach Post’s 2016 “40 Under 40” Winner, and she is a Commissioner on the Commission for Technology and Innovation for the City of Long Beach. She has cultivated the “Art of Fearless Asking” to “magically manifest” her visions into reality.

She is the founder of Wonder Women Tech, a global conference platform highlighting, celebrating, and educating women and diversity in STEAM, and has launched Junior Innovation Camps for underprivileged kids. She is founder of two hackathons–Hacks 4 Humanity, a hackathon for Social Good, and Wonder Women Hacks, a hackathon to address challenges facing women and girls. She received a three-year commitment from the City of Long Beach to host the Wonder Women Tech Conference from 2016 – 2018 at the Long Beach Convention Center.

Lisa Mae is currently on the Advisory Board for the California Women’s Conference and InnovateLA, which produces LA’s Innovation Weeks in October and speaks at conferences, events and universities. Lisa Mae recently created The Wonder Women Tech Show, a talk show web series that highlights pioneering women in STEAM, innovation and entrepreneurship. She is also co-host and producer of the show.

Lisa Mae organizes socially innovative projects, like the global “I Am Equality” photographic campaign, which launched in 17 cities and 5 countries around the world. She has hugged over 8,000 people with her Love, Hugs and Inspiration Campaign.

She volunteers with the Long Beach Code for America Brigade, and other tech initiatives geared towards civic engagement and community building. She helped organize a global #Fishackathon with the U.S. Department of State and is excited to build long-lasting global partnerships to expand the vision of Wonder Women Tech.