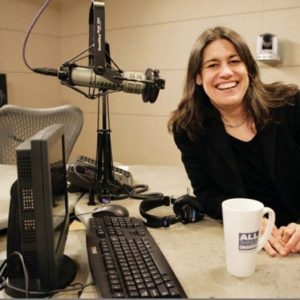 Laura Sydell is NPR’s Digital Culture Correspondent. For over a decade she has reported on the impact of technology on culture, society and human behavior for NPR’s major newsmagazines “Morning Edition” and “All Things Considered.” Formerly, she was Sr. Technology Reporter for PRI’s Marketplace and a reporter at WNYC in New York City where she covered the culture wars in the 1990’s. She has also contributed to “This American Life” and NPR’s “Planet Money.” Her work has won numerous awards including a Gerald Loeb Award for Business Reporting and honors from Investigative Reporters and Editors for “When Patents Attack!”. She was a National Arts Journalism Fellow at Columbia University, a Freedom Forum Teaching Fellow at UC Berkeley’s Graduate School of Journalism, where she also taught as a lecturer. She has a JD degree from Yeshiva University’s Cardozo School of Law and a BA , Magna Cum Laude in Russian Cultural History and Theater from William Smith College.