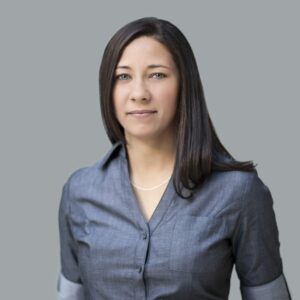 Kristen Kavanaugh graduated from the United States Naval Academy and was commissioned as an officer in the United States Marine Corps in May of 2002, at the onset of Operation Enduring Freedom (OEF) and Operation Iraqi Freedom (OIF). She served honorably on Active Duty as a Comptroller for five years and was ultimately promoted to the rank of Captain. Her service included one combat tour in Iraq’s Al Anbar Province in support of OIF.
In an effort to “get back into the fight,” Kristen returned to graduate school at the University of Southern California (USC) to earn a master’s degree in Social Work with a concentration in Military Social Work. In 2013 she was recognized as a White House Champion of Change for her work during the military’s repeal of Don’t Ask, Don’t Tell. Kristen is currently the Senior Partner for Diversity and Inclusion at Tesla. She is a member of the Truman National Security Project’s Defense Council, a national security focused development program for leaders who strive to continue their public service beyond the battlefield. She resides in San Jose, California with her wife, Chloe, and son, Wesley.