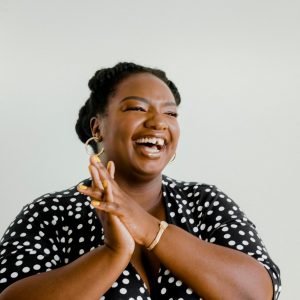 Kima Jones has received fellowships from PEN America Emerging Voices, Kimbilio Fiction, Yaddo, and the MacDowell Colony. She was named a “shape-shifter who pushed pop culture to be more representative, inspiring, and meaningful for communities who are typically ignored by mainstream media” on Bitch’s inaugural Bitch 50 list in 2017. The Los Angeles Times called Kima “2018’s literary breakthrough” and “an important new voice on the national stage.” The New York Times says she is “taking publishing by storm.” Kima founded Jack Jones Literary Arts in March 2015 and works as lead strategist on all publicity campaigns and is especially proud of her work on the 2017 Pulitzer Prize in Poetry winner, Olio, by Tyehimba Jess; the 2017 PEN America Robert W. Bingham Emerging Fiction Prize winner, Insurrections, by Rion Amilcar Scott; the 2017 Midland Authors Award winner in Adult Fiction, Know the Mother, by Desiree Cooper; and May-lee Chai’s Useful Phrases for Immigrants. Kima divides her time between Los Angeles and New York. She writes poetry and prose.