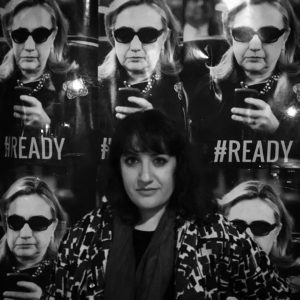 Writer and creative consultant Kate Stayman-London most recently worked as Lead Digital Writer for Hillary for America, where she had the opportunity to write digital content on behalf of Secretary Clinton, President Obama, President Clinton, Vice President Biden, Michelle Obama, and others. She also wrote, directed, and produced videos for surrogates including President Obama, Vice President Biden, Lena Dunham, Will Ferrell, Uzo Aduba, Josh Charles and others. Prior to joining Hilary for America, Stayman-London served as Lead Storyteller for Change.org, where she wrote for some of the most recognized activists in the world, including the parents of Trayvon Martin and Nobel Peace Prize nominee Malala Yousafzai.

Kate’s feminist comedy blog, Ladies Against Humanity, was named a 2015 BlogHer Voice of the Year. It has over 1 million views, more than 40,000 tumblr followers, and has been profiled by media outlets including New York Magazine, Bitch Magazine, and Autostraddle.

Kate is currently catching up on sleep, dismantling the patriarchy through jokes, and traveling as much as possible. If you want to work with her on something fun, reach out and say hi — she’d love to hear from you. Learn more about Kate and her work at katestaymanlondon.com.