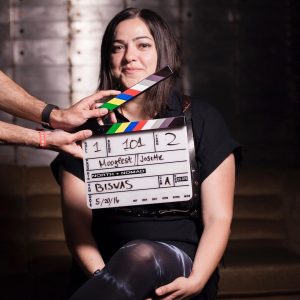 Josette Melchor is the Founder of Gray Area Foundation For The Arts, a leading San Francisco non-profit dedicated to applying art and technology to create social and civic impact.

As a Community Organizer, she partners with cities to address civic issues through public activations such as the Urban Prototyping Festival. A respected Executive Director, she has implemented sustainable revenue models to stabilize organizations and led fundraising campaigns to revive the historic Grand Theater as an 800 person venue in the Mission District as well as the Oakland Fire Fund to serve hundreds affected by the Ghostship tragedy.

As a Curator, Josette instigated the first exhibition that paired artificial neural networks with artists which helped establish the Artists and Machine Intelligence program at Google.

She was gifted her first set of turntables at seventeen, which inspired her to DJ and develop an eclectic collection of music at the confluence of disco, techno and house. Her selections are influenced by over fourteen years of large-scale media arts production and relationships with well known music producers.

She has led the development of hundreds of creative technology projects utilizing cutting edge technologies and alongside work at Gray Area is starting an experiential media studio Dreamboat with a small team of artists.

In other words, Josette Melchor is a Human classified as a Community Organizer, Curator, Entrepreneur, DJ, Queer Mexican Woman programming life at the intersection of art and technology based in San Francisco. She founded Gray Area Foundation for the Arts– a leading nonprofit media arts center– more than a decade ago and is driven to serve diverse audiences with her work.