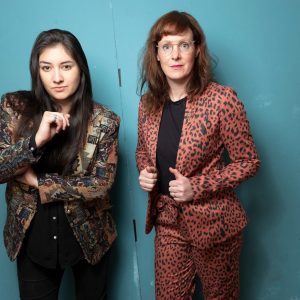 Jess Salomon is a Canadian comedian now based in New York. She was a 2017 StandUp NBC Finalist and had her stand up featured on SiriusXM’s “Raw Dog”. She’s done lots of cool festivals including Just for Laughs, the Winnipeg Comedy Festival, the Laughing Skull Festival, San Francisco Sketchfest, and she recently taped her debut album at the 2018 New York Comedy Festival with 800 Pound Gorilla.

Jess has written for the award-winning sketch comedy show “Baroness Von Sketch” (IFC/CBC) and her comedy has aired on television in Canada on the CBC and radio shows like SiriusXM’s “Canada Laughs” and CBC’s “LOL”. She also performs as part of the comedy duo called The El-Salomon’s, with her wife Eman El-Husseini. Check out their cartoon account on Instagram: @theelsalomons if you love love!

Jess is very excited to be at her first Lesbians Who Tech Conference repping the Brooklyn-based monthly, comedy-variety show/political movement/brand in the making, THE LESBIAN AGENDA with her co-host and co-producer, Sophie Santos.