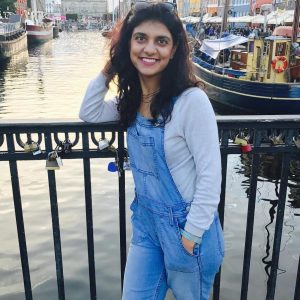 Aditi Khullar works as a Data Science Engineer at Two Sigma, a New York based Hedge Fund that uses sophisticated technology to find value in world’s data. She is purusing her second Master from University of California, Berkeley (part-time in Data Science) and completed her Masters of Computer Science at the University of Illinois, Urbana Champaign (2015). She served as a summer intern at Sverve, Inc (2014), a New York-based startup that helps brands magnify their social influence using blogger communities, where she led the company’s product roadmap and innovation while managing all aspects of product development from concept to design to launch. She previously served as a senior business analyst at VMock, Inc (2012 to 2013), a Chicago-based startup that aspires to be India’s number one online career enhancement platform. In this role, she designed and implemented the scoring algorithm for VMock’s Freemium product-‘Automated Resume Feedback’. As a member of the technical staff at Oracle Pvt Ltd (2010 to 2012), she initiated automation of more than 1200 test case scenarios across 40 identity management systems saving at least 800 manual hours of work per week. Previous internships include the Windows mobile team at Microsoft (2009), the Asia Pacific Students Entrepreneurship Society (2008), and the Computer Science Corporation (2008). Aditi also holds a B.Eng. in Computer Science from the Delhi College of Engineering, New Delhi (2010) and is also a CFA Level 2 candidate. Her love for travel and data is immense and during her free time she is usually found trying to combine them both.