On The Fence About Coming To SF Lesbians Who Tech Summit? 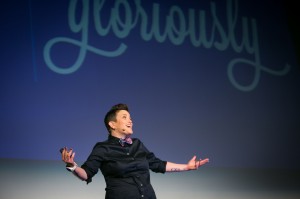 Still on the fence about coming to the Lesbians Who Tech SF Summit Feb 26-Mar 1?

Check out the short blog post our friends at Purpose wrote about the NYC Summit!

Purpose Senior Strategist Samhita Mukhopadhyay was recently a featured speaker at New York City’s first ever “Queer Women Who Tech Summit.” The summit is the only event focused on increasing visibility and tech participation in two historically underrepresented communities: women and LGBTQ. Hundreds of attendees (both queer and allied) gathered at NYU Law School’s Tishman Auditorium to listen to presentations ranging from “Reframing the Issue of Diversity in Tech” to “Using Technology to Create the Most Radical LGBTQ World” to “How to Break the Bro Code.”

Mukhopadhyay addressed the audience on the Internet’s unique ability to change hearts and minds like never before. The activism of feminists on the Internet shows us that, when we work to engage new audiences, they show up in full force. Citing hashtags like #yesallwomen and #bringbackourgirls, Mukhopadhyay spoke about the recent profound moments that have harnessed that collective power. We have entered a new realm where we want to think through how we can engage new audiences around politics and bring them along the commitment curve to engage in more substantive change like donating to progressive causes, attending rallies and starting new chapters in their towns or cities.