So that was awesome.

tl;dr
During the Lesbians Who Tech Summit, queer techies got together to collaborate on projects benefiting 5 social good orgs. The results were badass. 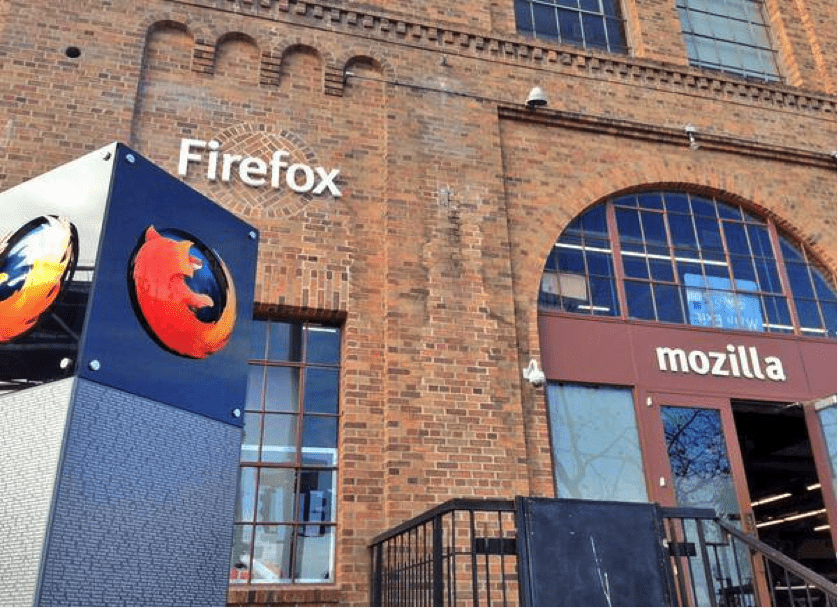 Remember that other major technology conference for LGBT women?

If you’re reading this, you probably know by now that the Lesbians Who Tech Summit was a huge and extraordinary success.

There were thought-provoking, inspirational and hilarious speakers. There was socializing over lunches and dinners and drinks. There was cycling and golfing and brunching and startup pitches and comedy. All the things.

But my favorite part of it all? The hackathon, hands down. Here’s why:

The event was was held at Mozilla on the Embarcadero waterfront, where attendees were welcomed by Lukas Blakk, a Mozillian donating her weekend to making the place available to hackathon participants. The space was uber-comfortable and had just about everything one needs to be a highly productive techie: free wi-fi, breakout rooms, whiteboards, a fully-stocked kitchen and lesbian co-workers. 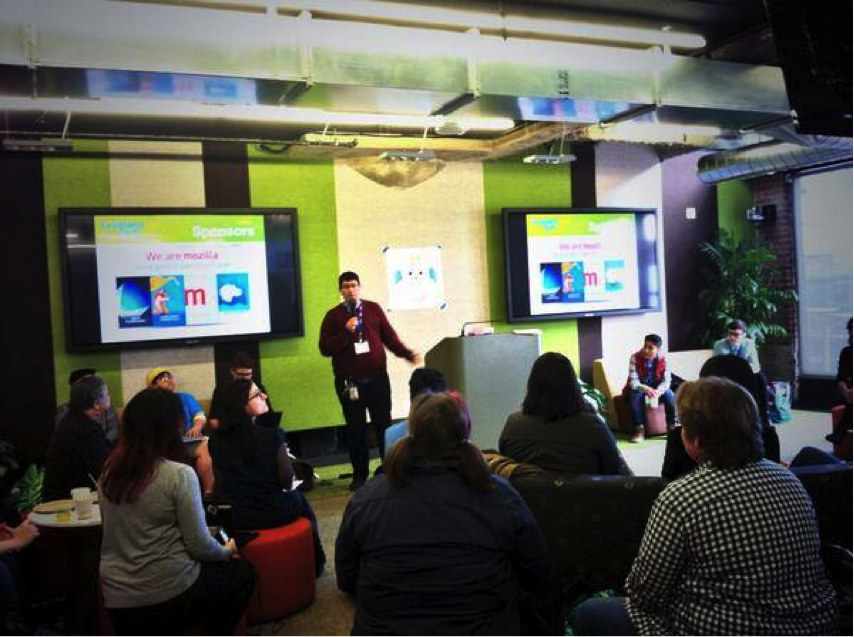 Lukas Blakk (@lsblakk) shares thoughts on being a part of the Mozilla Foundation.

Things kicked off with a group exercise that was, for the most part, your run-of-the-mill icebreaker. That is, except for one small thing that was actually a really big thing: people were asked to share their preferred gender pronouns (PGP) when making introductions during the activity.

Let me say that again: a hackathon hosted at a major technology company for a large conference opened up with everyone sharing their preferred gender pronouns. That doesn’t happen. If it wasn’t already obvious, it became clear right then that this would not be your typical hackathon. 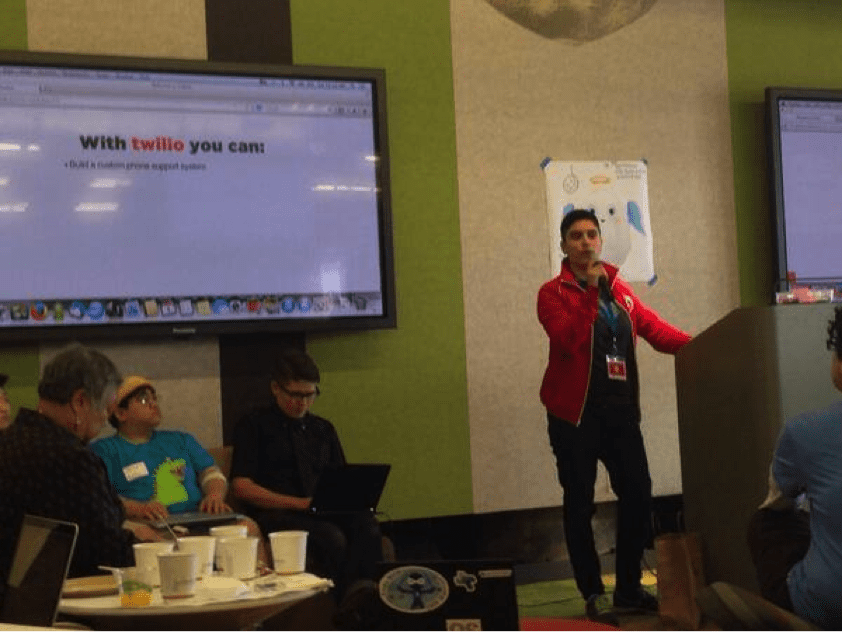 Representatives from companies like Twilio, GE, Indiegogo and Apple were in attendance to recruit new hires, promote services and show support.

I’d heard of a similarly non-competitive hackathon format before, but I’d never observed one in the wild, let alone participated in one. I was initially skeptical about how productive it could really be given that there’d be a large group of people from different technical backgrounds working together on just a very few projects, but by the end of it, I was completely sold on the concept.

There were no judges…no prizes. Instead of the usual BYO Project setup, there were a handful of social good organizations who pitched ideas for work they needed help with. People formed teams around each organization’s ideas and eventually defined the projects they’d commit the next 24 hours to completing. Open source solutions were heavily encouraged (as they should be), and participants were asked to approach designs with the objective of making it easy for the organizations to take over and maintain the work once the event was complete.

Here’s a rundown of the orgs that pitched and the contributions made by the participants:

Summary:
Astraea brought two big challenges to the table; improving awareness of the Astraea organization and improving the interconnectivity of grantees. Mix in a few coders, a handful of designers, a skosh of marketing professionals, and a pinch of tech industry vets, and you get three separate projects in two short days. Imagine getting a free logo redesign, complete with advice on re-branding and a professional press packet to boot. Imagine getting an Astraea-branded web application that established the foundation for an Astraea-branded mobile application. Then imagine having a gorgeously designed website driven by a data set which you could control and instantly update by simply modifying a spreadsheet. That’s what the project teams for Astraea delivered, and I am here to tell you that it was awesome.

Summary:
The foundation had a labor-intensive application process and no easy way to search for important information once received. The project team took on and nailed the challenge of redesigning the website, creating an online version of the scholarship application form and providing an easier way for the organization to track progress. Efficiency FTW. 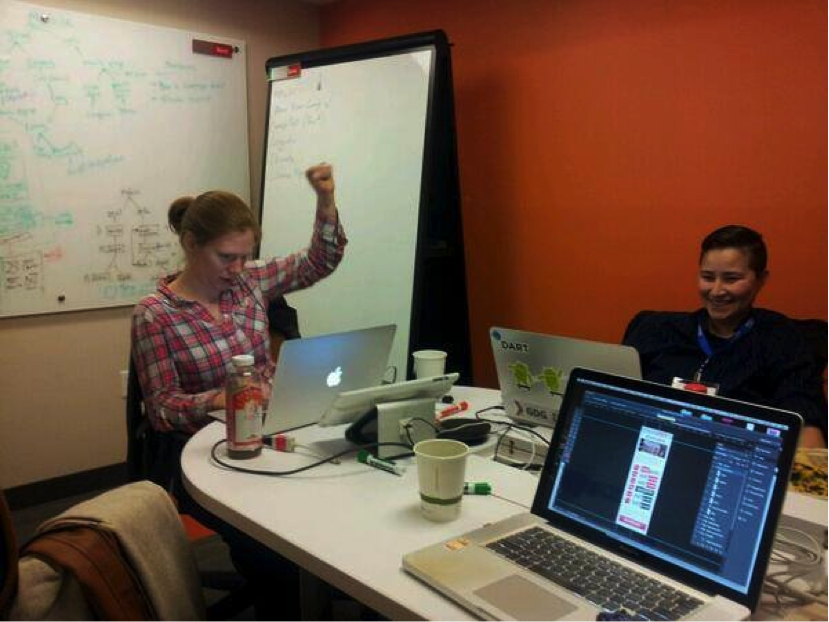 Summary:
AllOut shared the fact that they were experiencing an 80% bounce rate among users visiting their website on mobile devices (to which the audience responded with a collective “ouch”). At the heart of the problem was a non-responsive UI and user workflows that were too complicated. The AllOut project team delivered an all-new and compelling mobile experience with a redesign that streamlined the signup process and made it much easier to show support for the causes users care about.

Summary:
Maven is on a mission to bridge the gap between tech resources and LGBTQA youth. For the hackathon, the project team took a WordPress site that was extremely difficult to maintain and customize, and completely rebuilt it in a day with Ruby on Rails, earning a well-deserved round of applause.

Summary:
Teagan had revived a previously abandoned project that provided resources to help trans* and gender nonconforming people around the world find safe restrooms to use. The problem was that she was maintaining the site on her own in her spare time and hadn’t had an opportunity to make some critical updates. The hackathon project team helped to refactor the site’s front-end to use a more robust and maintainable client-side framework. They also implemented a new feature which allows users to search for the nearest safe bathroom via text message. 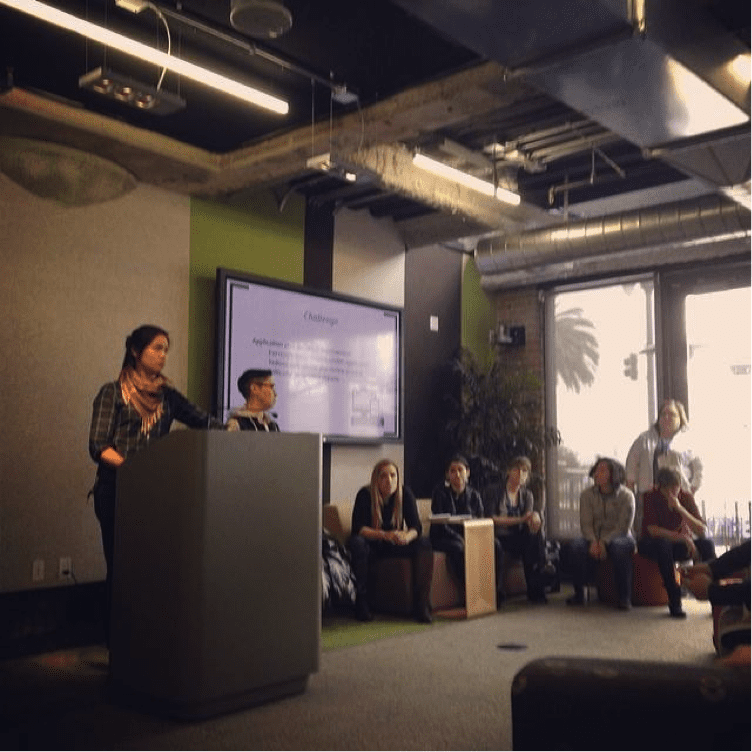 When all was said and done, the products delivered by the project teams were impressive. Their work reflected a level of creativity, skill and professionalism that was rivaled only by the caliber of haircuts and shoes in the room, and still, they’d created a welcoming and supportive space for newbies to participate and contribute.

I can only hope we’ll see more hackathons modeled after the one at the LWT Summit. I, for one, am certainly looking forward to 2015.