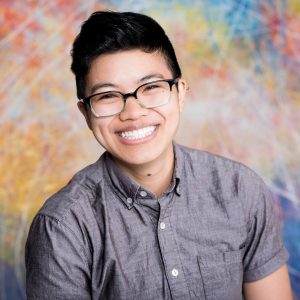 The Salvation Army of Greater Houston

Melanie Espinosa Pang is a social worker and serves as Data and Program Evaluation manager with The Salvation Army of Greater Houston. In June of 2016, she was appointed co-chair of Houston Mayor Sylvester Turner’s LGBTQ Advisory Board, a board of 49 LGBTQIA leaders and the first of its kind in the City of Houston. Throughout her career, Melanie has served in a variety of communities and capacities, aiming to further equity and lived equality — from advocacy efforts to reduce and prevent childhood obesity in food deserts to serving as a case manager to refugee minors in foster care and young adults experiencing homelessness. While attending the University of Houston, Melanie served as an intern for a variety of organizations that exist to build equitable access to opportunities, such as CAN DO Houston, Collaborative for Children, Legacy Community Health Services, Planned Parenthood Gulf Coast, Local Initiatives Support Corporation (LISC), and the Houston Food Bank.
As part of 2016’s post-election healing, she created a local weekly e-newsletter called Preparing for Action (preparingforaction.org) which connects everyday people to local opportunities to take action through efforts in organizing, solidarity, volunteering, and caring for one another.

With a decade of experience in LGBTQ rights advocacy, Melanie was awarded the 2016 President’s Award for Distinguished Community Leadership by The Houston GLBT Political Caucus and was voted OutSmart’s Gayest and Greatest “Most Valuable Female Volunteer.” She also received the honor of being named “Social Worker of the Year” in 2015 by National Association of Social Workers Houston. A teacher at heart, Melanie also taught at the University of Houston, in both the undergraduate and graduate levels, courses such as Introduction to LGBT Studies and Organizational Behavior and Change. Melanie is a proud, queer-identified Asian American woman who believes in striving for social justice through more connection, data, creativity, and compassion.