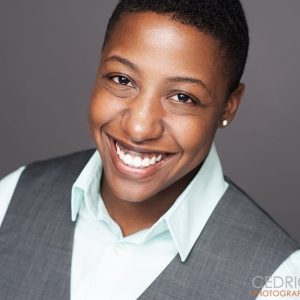 Eboné F. Bell is the founder and Editor-in-Chief of Tagg Magazine and Tagg Communication. After seeing a lack of queer women represented in local publications (around DMV), she decided to start a magazine and website to tell our stories, provide resources and create events.

Before starting Tagg, in 2002 she founded the first group for queer people of color called True Colors of Maryland (TCOM) at University of Maryland College Park. The group is still thriving today and meet weekly.

After college, she immediately immersed herself in the Washington Metropolitan Area LGBTQ community for several years. Eboné has produced such events as the annual Capital Queer Prom giving the older LGBTQ community a second-chance prom, Capital Pride Women’s Events, Pride in the Sky, and the Put on the Gloves Fashion Show benefitting The Trevor Project. These events have raised over $20,000 for LGBTQ non-profit organizations.

This year Tagg Magazine will celebrate five years of telling thousands of stories, creating safe-spaces for the queer women, and providing important resources for the LGBTQ community. Over the past two years, Tagg Magazine as been named “Top 25 LGBTQ-Owned Companies” by the Washington Business Journal.

Last year, Eboné founded the Tagg Scholarship Fund—a scholarship created specifically for young queer woman of color who can’t afford to attend school. After realizing that only 23% of Black LGBTQ college students graduate, she wanted to make a difference within marginalized communities.

While running Tagg, she still manages to lend her time to volunteer efforts in the Washington, D.C. area. Last year she served as the Table Captain Co-Chair for the Human Rights Campaign National Dinner. Also, she has served on the board of the Capital Area Gay & Lesbian Chamber, creating the first women’s networking series in Washington, DC. Tagg also continues to promote and support such organizations as SMYAL and The Point Foundation focusing on LGBTQ youth.

Eboné has expanded Tagg through two podcast shows to reach LGBTQ women across the country: Tagg Nation and Queer Public Health, the only podcast dedicated to providing resources and information related to LGBTQ health.